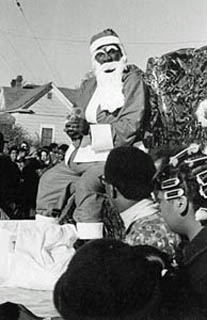 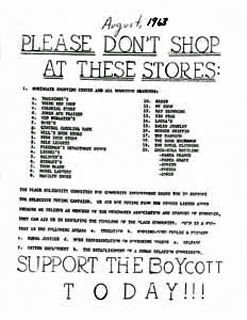 Previous Pause Next
1 of 2
By
Lindsey Huth

It was a little chilly, but a beautiful day, the morning of November 29th, 1968. Everyone was lined up on Fayetteville Street as the yearly Christmas Parade began. The high school band played all of the best Christmas carols and performers were festively dressed to the nines. Pretty cars with smiling people pulled elaborate floats slowly down the street, and kids with big, toothy smiles toppled over one another to catch the candy that was being tossed to the crowd. Something about this day though, was different than it had ever been.

The Selective Buying Campaign started in mid-July 1968, targeting white merchants in Downtown Durham. More than 29 businesses were put on the “do-not-patronize” list by The Black Solidarity Committee for Community Improvement until their 88 requests relating to welfare, public housing, and equal protection under the law were addressed. This parade turned out to be a monumental event for the movement.

Every year, a white Christmas parade was held in Downtown Durham, but this year, on the same day, there were two parades—one for whites on Main Street and one for blacks on Fayetteville Street. At the very end of the Fayetteville parade, a black Santa Claus was displayed atop a white float. Santa stood proud, symbolizing the unity of the black community under what the Civil Rights legacy tour calls Durham’s most successful boycott, while also serving as a reminder to avoid shopping in the white downtown business district that holiday season.

The large turnout and estimated $900,000 in losses incurred by the white businesses showed the inspiration surrounding what came to be known as the Black Christmas Parade. After this day, 14 more businesses were added to the “do-not-patronize” list, and once the holidays were over, six joint committees were created to address the 88 boycott requests. The downtown business boycott is remembered as the first demonstrations of strong unity within the black community for a common cause. That November, Black Santa brought hope and new promise for blacks in Durham. This gift became tangible on February 16th, 1969, when the campaign came to an official close. For the first time, blacks joined the job market of Downtown Durham, holding jobs as clerks, bank tellers and some even managers of department stores. The year of 1968, Durham’s black community called on Santa Claus to help them fulfill their Christmas wishes. And though not on Christmas Day, they were at least, in part, granted.