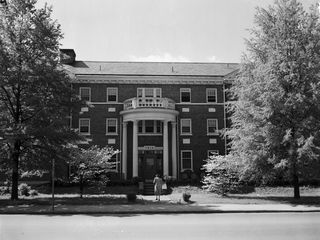 1 of 1
By
Madeleine Katz

A safe space to gather, a safe place to unite. A place to be proud of your identity.  In 1971, eight years after Betty Freidan’s publication The Feminine Mystique provided a manifesto for the movement of second-wave feminism in the United States, the Durham YWCA opened its internally-sponsored Women’s Center. The program was first led by YWCA program committee chair Muriel Smith, with the original intention of simply creating a Women’s Library focused upon literature on women’s rights and history. However, once greater need for a center of feminist action was realized, Smith’s vision for the library quickly expanded to become much, much more. The project’s scope widened to include not only a library, but also a meeting space as a centralized location for the other women’s interest groups present in Durham.

The center rapidly became the hub of feminist activity for women from all walks of life. In the words of historian Dr. Melissa Estes, the Women’s Center allowed the YWCA to “serve as the public face of feminism in the city.” After the center’s creation, it sparked a wave of other programs that established their own roots in the triangle community with the support of the Women’s Center, such as the Durham Women’s Health Collective, Triangle Area Lesbian Feminists, the Women’s Health Teaching Group, and even included a day care for working women and a rape crisis hotline.

Throughout 1972 and 1973, the Women’s Center held their series of highly successful public workshops on a variety of topics and feminist issues that affected women’s daily lives. These included everything from routine car repair and maintenance, to Black women and Feminism, to body image and healthy relationships. The extremely active League of Women’s Voters also routinely offered workshops and panels on the Equal Rights Amendment.

The Women’s center created a “safe space” for women to be a part of a large and supportive community, crucial in a time when feminism operated on ideals that were still considered controversial and radical in the eyes of many who adhered to traditional conservative stereotypes about the female identity.