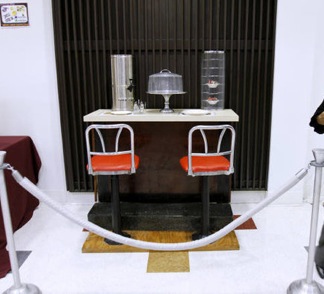 Previous Pause Next
1 of 2
By
Illana Bernstein

How powerful is silence? Can you really promote a cause by not saying anything at all directed toward authorities? North Carolina College students did just that. They vowed to fight against segregated serving policies through silent and peaceful protest. They would stand up, or, rather, sit down, for their rights. Following the February 1st sit-in protests in Greensboro, Durham students took charge.

On Monday, February 8, 1960, seventeen black North Carolina College students staged sit-ins at three white lunch counters in Durham. Several white Duke University students joined them and pledged to occupy seats until the blacks were served. First they went to Woolworth’s. They sat in vacant seats and asked for service. The waiters refused. But the protesters did not fight back. They remained seated and started talking quietly amongst themselves, studying textbooks, and reading newspapers.

At noon, the store received a fake bomb threat and immediately closed for the rest of the day. Then they left for the Kress store, but did not even make it into the doors before the management closed the store. Next, they marched over to Walgreen’s, but whites had completely monopolized the counters. They had no choice but to leave.

During the protest, no black students were arrested, but two white students from Duke were taken to the station for questioning. The protesters were not dissuaded. They planned to continue the sit-downs the following day. On Tuesday morning, they marched to the stores to reclaim their rights. They were met by signs reading “Closed temporarily in the interest of public safety.” All three stores had been closed.

The protest was brought to a standstill, but did not deem their attempts “failed.” These attempts encouraged nonviolent attempts at justice throughout the nation. For months following, black students all over the Deep South mimicked the Durham sit-ins.

The Durham students showed how powerful protest can be without the interference of hateful words or violent actions. The Durham sit-ins were the beginning of a 4 year nationwide effort that resulted in the desegregation of all lunch counters in 1964.