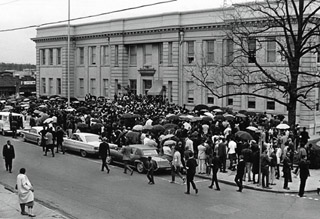 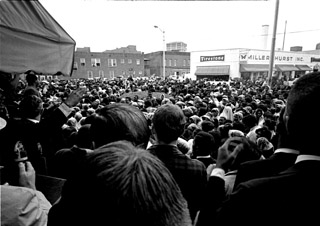 Previous Pause Next
1 of 2
By
Rebecca Spicehandler

Certain events are so monumental that they define the soul of a generation. Where were you when the planes hit on 9/11?  What were you doing when MLK was cut down by a sniper’s bullet? Such defining moments unite us all through our most basic commonality—being human. Black and white alike, Americans across the nation reacted with sorrow and anger to the news of Dr. Martin Luther King Jr.’s assassination on April 4, 1968.

“Rioting Erupts Across the Nation as Mourning Turns Into Violence,” “Trouble Breaks Out in Tar Heel Cities,” “[National] Guard Ordered to Greensboro and Raleigh,” the newspapers proclaimed… but peace prevailed in Durham. In stark juxtaposition to the hostility and unrest that consumed the country, the response of Durham’s black community, especially its youth, reinforced King’s own doctrine of nonviolence. A crucial actor in the planning of the event, Howard Fuller mollified the angry youth of North Carolina College the night of King’s murder. Convincing them to wait until the following morning to hold the march, Fuller recalls, “I didn’t think it was the way to respond to King’s death given who he was.” The 1968 Protest March was preceded by a memorial service, held at the NCC chapel, in which speakers stressed restraint from violence out of respect to the memory of King.

With their heads held high, organized into a single file line, the poised youth marched in silence. One historian notes, “There had been larger marches in the past decade, but none of them matched in tone, the gravitas of this slow cortege through the streets of Durham.” The march started at Fayetteville Street and ended in front of City Hall where a brief prayer service was held and eulogies given. The mourning crowd ordered Mayor Grabarek to accept a list of demands, including the lowering of the flag to half-mast, a city council proclamation honoring King’s memory, and a cancellation of public school on the day of King’s funeral. The normally unsympathetic, white leader acceded to their wishes, recognizing the magnitude of the event nationwide.