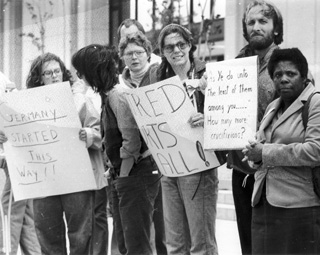 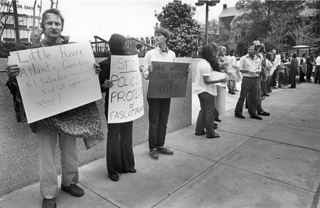 Previous Pause Next
1 of 2
By
Leah Elliott

On Friday, April 17th, 1981, 125 men, women, and children held up these signs and others as an act of protest in front of the Durham County Judicial Building. Their demands were universal, but their presence that day publicly denounced an incident of violence in their own community.

Five days earlier, April 12th, Ronald “Sonny” Antonevitch and three others had been sunbathing on the banks of the Little River near Johnston Mills Road when two men approached the group. Yelling anti-gay threats, they began to assault the four sunbathers. According to his personal account, the two men approached Antonevitch and finding him unable to move due to a physical handicap began to beat him and asked him, “Do you want to die?” After three days spent in Durham and Chapel Hill hospitals suffering critical injuries to his head and kidney, Antonevitch, who was only 46, passed away.

In the week following the assault, police charged two men in their early twenties with the murder. And as the courts began their hearings, the LGBTQ community and its supporters took a public and unified stance against hate crime. The vigil held outside of the Durham County Judicial Building was the first in a series of protests and parades that would define the LGBTQ movement in Durham for decades to come.

As Carl Whitman, one of the protestors that day shared with the Durham Herald: We just don’t want to let this incident at the Little River pass. It’s a question of the whole atmosphere that would let something like this happen.”