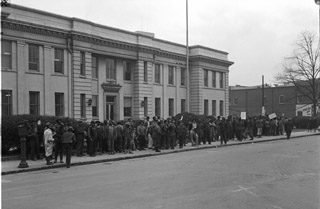 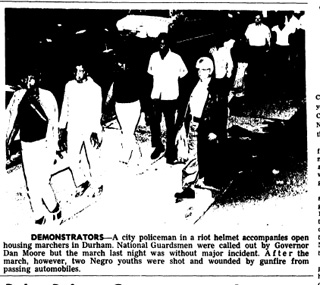 Previous Pause Next
1 of 2
By
Julijana Englander

“This is a real travesty of Justice.” The travesty of justice, which Eugene Hampton Junior was referring to, was the Bacon Street Project and the racial tensions in Durham surrounding public housing policy. On July 20th, 1967, a group of 300 African Americans marched the 10 blocks from St. Joseph’s Church to City hall  “to demonstrate to the white folks we [African Americans] could march peacefully,”

Ben Ruffin, North Carolina Fund worker and march organizer said. The group was protesting the reforms of the Bacon Street Project and marching to diminish preconceptions that African Americans could not march peacefully, amidst headline of violent race riots around the country, particularly in cities like Newark. The community members marched “to underline their demands for better housing and other social reforms,” according to The Gastonia Gazette.

The United Organization for Community Involvement was at the forefront of advocating for fair housing for African Americans. The UOCI felt the Durham Housing Authority was trying to create a ghetto and restrict blacks from settling in other parts of Durham, by forcing African Americans into the city’s South East section. The Bacon Street Project was exasperating the white power structure of Durham.

For fear of violence, The Major of Durham called in the National Guard to patrol the streets on the day of the July 20th Protest March. The Protest was mostly peaceful; however, the protesters were followed by a jeering crowd of white male youths, and two African Americans were shot and killed. The aftermath of these tensions and protests was the formation of a special commission, the Carleton Committee, to discuss the UOCI’s concerns surrounding policy inequality.

In the end, steps were made toward housing equality for African Americans and many would consider these protests successful.