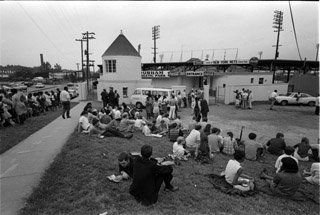 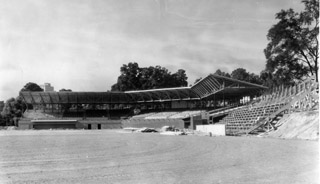 Previous Pause Next
1 of 2
By
India Grant

The black community began protesting to integrate this signature athletic park, home to the Durham Bulls Baseball Club in 1957 when the first two black players, Bubba Norton and Ted Richardson, were added to the roster.

1957 in Durham was a year that hosted both the preservation of segregation as well as the onset of integration. At this time, the Durham Athletic Park resembled most recreational sites downtown. It mainly catered to the entertainment of whites but did have segregated seating for blacks.

It was during this year that the Durham Bulls minor league baseball team welcomed its first two black players, Bubba Morton and Ted Richardson. At this moment tensions rose in the black community making it harder for African Americans to be passive about segregation.

On April 18th, the night of the opening game of the season, demonstrators organized to integrate seating at the Durham Athletic Park. Approximately 150 African Americans flooded the white-only entrance in attempts to get admission and sit in the section of their choosing. The protestors were continually denied general admission but were offered segregated seating and eventually the demonstrators were escorted off the premises of the ballpark entirely.

By 1964 the Durham Athletic Park along with most other public facilities like libraries, hotels and restaurants became integrated. This was due in part to the progressive efforts of newly elected Mayor Wense Grabarek. In 1963 at St. Joseph AME Church Graberek announced to all who were present at an NAACP meeting that he would immediately begin mobilizing to meet some of the wishes of the black community. Upon this announcement the NAACP decided to postpone their direct action demonstrations like those that occurred at the Durham Athletic Park in 1957 to await some progress on behalf of Graberek.

This led to the Durham Interim Committee, a bi-racial group designed to discuss race relations in the city.  Particularly in Durham it was the efforts of a persistent black community, progressive leaders and collaboration between blacks and whites that led to a domino effect in integration and thus the desegregation of Durham Athletic Park.