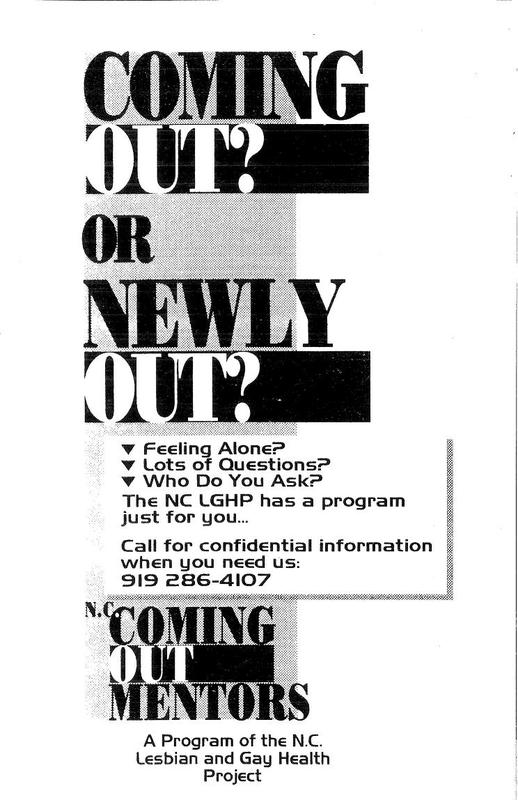 The Durham Lesbian and Gay Health Project (LGHP) was founded in 1982 “to openly and affirmatively promote individual and community well-being of gay men and lesbians…” The HIV/AIDS crisis was looming, revealing deep homophobia in the healthcare system. Founders David Jolly, Carl Wittman, Timmer McBride, and Aida Wakil wanted to connect gay men and lesbians with gay-friendly physicians and more information about their health needs. Many volunteers recall phone threats from homophobic opponents of the Project. For their safety, the location of the Project was kept secret.

The group served the Durham community through referrals, educational programs and direct support. A Healthline calling service referred callers seeking medical and social support to other groups. Healthline was located on 9th Street. As the AIDS crisis deepened, the organization grew, transitioning from a volunteer-run group to a non-profit staffed by permanent directors. Jill Duvall and Scott Hustead were the first directors. Private donors and local organizations sustained the organization. Several years later, LGHP experienced a number of internal leadership struggles. The board was unable to hire someone who could lead the donor campaign or complete grants. Additionally, the African American community publicly criticized LGHP for not serving the needs of people of color. The project primarily supported white gay men and funded services for those affected by HIV/AIDS. Unable to address racial, gender, and class divides, LGHP lost its momentum. As a result of these crises, the organization closed in 1996.

The Project’s legacy, as a whole, is larger than providing health services. A network of support was formed in response to public stigma surrounding the AIDS crisis. Although lesbians did not receive the same attention, LGHP organized a Lesbian Health Clinic. The organizing capacity of LGBT people grew as they mobilized to support each other and build their political power.