Community Refuses to be Uprooted – The New Bethel Baptist Church 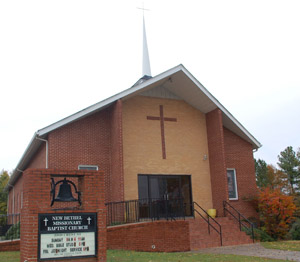 Throughout the 1960s, the East-West Durham Expressway came charging into Durham to make the city a hub of urban renewal. As the highway forged its path through the Bull City, planners were unaware of a major roadblock ahead. The center of Durham’s 200-household Crest Street community was the New Bethel Baptist Church. Located west of Old West Durham, the church was established in 1879 and served as a pillar of community strength and organization. When the expressway threatened to dismantle the church and its neighborhood, citizens took action. Duke University law students helped stall highway construction by insisting the state conduct an Environmental Impact Statement (EIS) to assess whether the project was environmentally sound.

In the meantime, the Crest Street Community Council (CSCC) plotted from its home base in the New Bethel Baptist Church. Residents organized meetings with city council and local civil rights organizations, and in 1978, filed a complaint with the United States Department of Transportation. Filed under Title VI of the Civil Rights Act of 1964, the complaint said that black residents suffered more than white residents did as a result of the expressway project.

Crest Street could not stop the whole highway from being built, but it could ensure fair compensation upon the community’s relocation. The council’s successful Title VI complaint guaranteed that the 65 relocated houses came with improved water lines, sewage systems, and roads. The New Bethel Baptist Church remained standing; its only battle wounds were altered landscaping and a new neighbor in the form of a large expressway. Despite being a small, low-income community, Crest Street showed the city and the nation that committed, well-organized citizens can make their voices heard. In this case, all it took was a bit of faith.