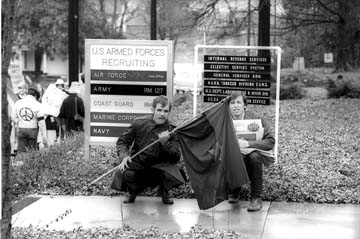 Previous Pause Next
1 of 2
By
Miranda Curtis

Duke student led protesters to the Durham Draft Board donned in the somber black robes of the specter of death. Across the country, these coordinated protests were designed to call attention to use of deadly toxins in Southeast Asia and the death of young draftees.

The Vietnam War was raging on the morning of March 18, 1970.  Instead of the jeans and button-down shirts they would normally wear to class, four Duke University students donned the somber, hooded black robes of the “Specter of Death”, a striking symbol of the unnecessary deaths and human rights violations that accompany war.

Leading a crowd of 88 others, the robed protesters marched through the rain from the Duke University Chapel to the Durham Draft Board at 323 East Chapel Hill Street.  There, they planted a sign reading “This building condemned as a public health hazard”.  They protested the use of deadly toxins by the U.S. government in the War and the futile deaths of their college-aged peers and friends, draftees forced to fight in a war they did not believe in.

Across the country, the New Mobilization Committee to End the War in Vietnam planned and executed similar protest marches.  Bomb threats closed the draft board offices in both Norfolk, VA and Austin, TX while nonviolent protests ensued in other cities.  In total, 96 draft board offices across the country closed to avoid the protesters, both violent and nonviolent.  These marches reflected the increasing intensity and growing cohesiveness of anti-Vietnam student protest movements.

The movement culminated six weeks later in the infamous Kent State protest on May 4.  The brutal deaths of the four students in Ohio led to one of the largest national    student protest movements in American history, involving over 4 million students.  The U.S. Government dismissed this march, diminishing its ability to alter war-time policy; however, it serves as a reminder that activism is not only a mechanism for affecting change, but also a means for individuals to cope with the atrocities and inequalities of human society.