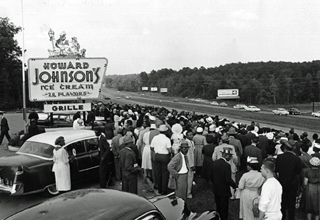 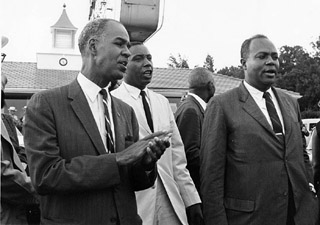 In August 1962, four students protesting racial segregation at the Howard Johnson Restaurant and Ice Cream Parlor were arrested and sentenced to 30 days in jail. Later that same month, more than 1,000 people staged a follow-up demonstration and the following spring, in May 1963, the crowd grew to more than 4,000 people demanding that African Americans be served with the same courtesy and access as white patrons. It was the largest protest to date in Durham’s history. More than a year later, Howard Johnson’s finally changed its policy and opened its doors to all.

The Howard Johnson’s Ice Cream parlor and diner, well known in the 1950s and 1960s for its delicious frozen treats and home-style meatloaf, was the site of weekly protests against their deep-rooted segregation policies. Floyd McKissick, Roy Wilkins, and James Farmer motivated the protesters in speeches at St. Joseph’s AME Church to stand up, to resist compromise, and to fight for what they deserved. This Black congregation and white supporters came to be known as the  “Freedom Assembly.” The catalytic speeches prompted protesters to jam Chapel Hill Boulevard on their way to the local Howard Johnson’s, where they initiated a spirited outcry against discrimination in public restaurants.

This series of actions occurred a year after the Freedom Rides of 1961, which challenged segregated travel, and five years after Durham’s Royal Ice Cream Parlor protests. At Howard Johnson, many activists sat for hours inside the restaurant waiting to be served while others rallied in the parking lot, making it difficult for white patrons to enter. All of the protests were non-violent, an admirable stance that was sometimes difficult to maintain. It was a seemingly endless battle; many were arrested and beaten, yet their hope stayed alive. Success came more than a year later when Howard Johnson changed their segregationist policies. These parking lot and sit-in protests were a crucial step in the continual struggle for civil rights in Durham, and other restaurants began following suit.