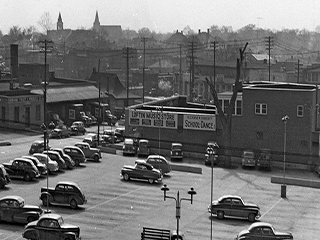 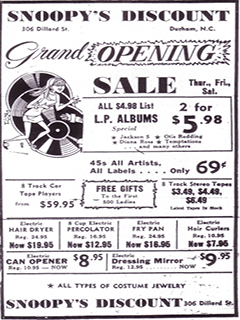 Previous Pause Next
1 of 2
By
Jack Stanovsek

Recorded music was an important tool for Durham's African American community and their fight for civil rights. Snoopy's Discount records, open in the 1960s and 1970s provided access to a studio and an outlet for record sales. Led by Jimmy Liggins, this effort was an economic generator and a gathering place for local black musicians.

Veteran R&B guitarist, Jimmy Liggins, arrived in Durham, North Carolina in the early 1960s. Beneath the factories and warehouses, the city he saw was a hotbed for civil rights and mirrored many places around the United States at the time. Another thing he noticed was that the city lacked a record label open to the black community.

Liggins had already realized the importance of music to the civil rights movement and the deep influence of artists like Bob Dylan and Sam Cooke on the American public before coming to Durham. Liggins himself stated, “Records is a market that can be used to brighten the future of lots of black people with jobs and higher prestige all over the country.”

When he saw that there were literally no places for blacks in Durham to record or release music, he knew he needed to make something happen, namely Snoopy’s Discount Records, a hang-out spot where rising black musicians could be inspired and create music. Their recordings were then set out across the country to a web of connections Liggins had formed in the industry over the years.

Up-and-coming artists like Kenny Mann remember seeing Jimmy as a god in Durham’s black community. Snoopy’s was a culture-hub in downtown Durham where black business, community, and of course music all came together, with Liggins their king.

The significance of Snoopy’s for black musicians spilled over the Durham county lines. Towns like Chapel Hill were still off limits to black recording artists, so Snoopy’s became an asset for blacks folks not only in Durham, but in the greater triangle area. By the late 1960s, bands like Kenny Mann’s Liquid Pleasure had released music and started to gain national attention. By opening Snoopy’s Discount Records, Jimmy Liggins was able offer black musicians an opportunity to add their voice to the continuing struggle of civil rights in Durham.