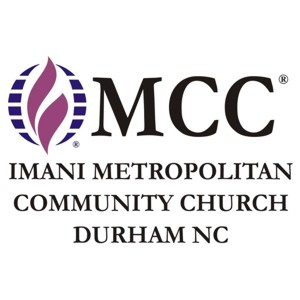 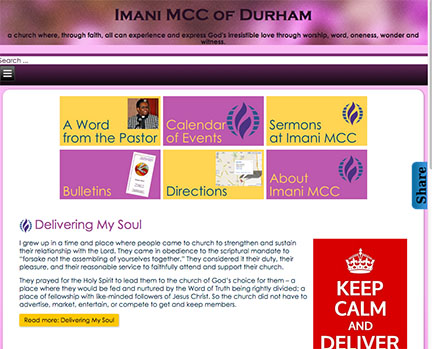 Previous Pause Next
1 of 2
By
Sean Dillard

Affirming faith communities are very important to many lesbian, gay, bi-sexual, transgender and queer (LGBTQ) people. Imani MCC is one of those communities since its founding in November of 1977. Imani, meaning faith in Swahili, is open to all people including members of the LGBTQ community.

“Had I not found Imani, I think I would have been dead.”

These sobering words are a reminder of the intense struggles that lesbian, gay, bisexual and transgender Americans face.  Toka Pearson, originally from Montgomery, Alabama, ran away from home when she was fifteen years old so that she could feel free to be who she was.  Without a strong support network of affirmation, Toka was led down a road of hardship and depression.  That is, until she found Imani Metropolitan Community Church, where she was taught the value of being herself.

Started by the Reverend Wanda Floyd in November, 1998, Imani MCC has been a welcoming place for all members of the Durham community for thirteen years.  Imani, meaning “faith” in Swahili, accepts all people into its congregation, no matter their past history, transgressions, or identities.  This often includes members of the LGBT community, who have few other places to worship and feel like they are free from judgment, but Imani is not restrictive.

“MCC Churches are not gay churches.  They’re affirming churches, and people say “Well you go to a gay church.” No I don’t.  I go to a church that’s all-accepting, all inclusive, doesn’t matter how you come.”

As Imani continues to grow as a faith community, so do its services in the field of civil rights.  A place that literally saves lives, Imani holds a special place for Durham and in the fight for LGBT acceptance.  More than anything, Imani is an incredible support network, and teaches the value of love and self-empowerment, especially for traditionally oppressed groups.

“People who have been dis[en]franchised, or marginalized as you might say, people like that need to know that Imani is here.”