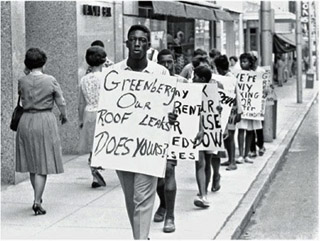 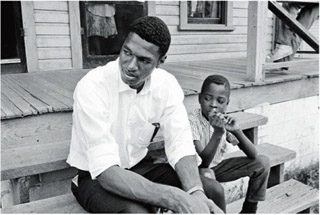 Previous Pause Next
1 of 2
By
Kaley Deal

“Your Neighbor is a Slumlord.”
“High Rent for Firetraps.”
“My Children Sleep with Rats.”

Protesters with painted signs bearing these word marched outside both Abe Greenberg’s office and home during the summer of 1966 in response to his unwarranted hikes in rent and disregard for the needs of his tenants by not meeting Durham’s housing codes. Most of the demonstrators were low-income black women, who, out of frustration, even tried to appeal to Mrs. Greenberg’s sympathy by describing the inadequate living situations of their children.

Greenberg had ignored housing codes and slipped past repercussions for failing inspections, and complaints to City Council were not enough to make a difference. This led to a groundswell of opposition within the Edgemont community, a “War on Poverty” backed by Howard Fuller and Operation Breakthrough.  Operation Breakthrough received funds from the North Carolina Fund, which had ties to both the federal government and private businesses.  Federal dollars had suddenly become very political.  The poor began to organize and protest.  Those who had previously felt marginalized had become empowered and were willing to fight for equal opportunity housing.

The construction of East West Expressway in the ‘60s destroyed many houses in the center of the African American neighborhoods of Hayti and Southside, leaving tenants in a very vulnerable position. It gave Greenberg and other landlords the ability to take advantage of many low-income families who were in desperate need of new homes.

Picketing at Greenberg’s private residence created a surge of contention and Operation Breakthrough’s board of directors became polarized.  However, action needed to be taken in order to improve living standards and adherence to housing codes in a city where nearly a third of the population was living below the poverty line and in deplorable conditions.

Even though Greenberg’s houses never fully met housing code requirements, other landlords in the area did make repairs for their tenants, and there was an improvement in the enforcement of the housing code.  The Edgemont community’s protest was successful bringing improvements to rental housing conditions and helping to redefine the role of Operation Breakthrough in Durham.