Integration in the Arts: The Carolina Theater 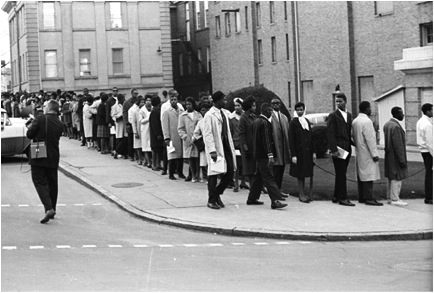 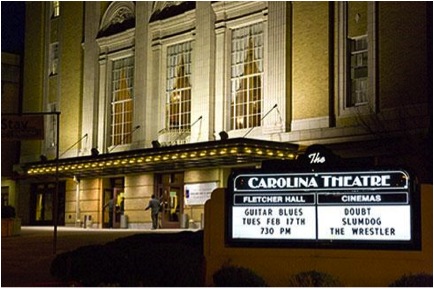 Previous Pause Next
1 of 2
By
Sara Heilman

In 1927, Marian Anderson, a famous African-American opera singer, performed at the Carolina Theater to a Black and white audience. Despite being granted admission to this event, Ms. Anderson’s Black fans were forced to enter through a different door, pay at a separate ticket booth, and use seats that required walking up three extremely steep, unsafe flights of stairs. Sadly, this was the norm at the Carolina Theatre where Blacks were invited to perform and attend shows and events but all aspects of their experience were segregated by race.

The Carolina Theater was built in 1926 as the only theatre in the area to admit Blacks and whites. It quickly became a go to place in Durham for community events, live performances, and movie showings. Decades later in the early 1960s, the Carolina Theater became a target for protests by desegregation advocates. Protesters, including Black theatre goers, North Carolina College students, and local Black high school students, with the support of a few white students from nearby Duke University and the University of North Carolina employed a round robin style action. This involved lining up to purchase their tickets at the white ticket booth and after being refused moving to the back of the line and repeating the process. The protests lasted for months, drawing coverage in the media and impacting the experience of white patrons who also had to wait in these long lines to purchase tickets. Protesters were called names and spit on, but this only motivated them to continue their efforts all day, every day, until the theatre was integrated in the summer of 1963.

The Carolina Theatre was placed on the National Register of Historic Places in 1977 in part because of these historic protests. To this day, the theatre remains important, dedicated to enriching the culture and economy of downtown Durham. This history is also now documented in an exhibit in the third floor lobby, originally designated for Black patrons’ use.